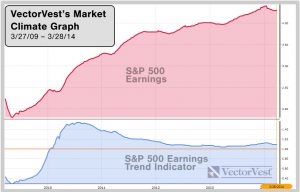 Is the Next Bear Market Here Already?

by Dr. Bart A. DiLiddo

The current bull market celebrated its fifth birthday earlier this week and brings up the question as to how long it will last. In order to answer this question, we would need to know when the next bear market begins. VectorVest did it in 2007. Can we do it again?

“The Confirmed Down signal that we received yesterday could be the entrée to a long Bear Market. We aren’t there yet because earnings are still rising according to our method of analysis. Yet, we no longer appear to have the support of an accommodative Fed and that can make things very bad for the stock market. So don’t be deceived by the endless parade of experts who will appear on TV and other places telling you to buy stocks. This is not the time to buy stocks. Just follow our Market Timing System and it will tell us when to go long again. At that time, we should be getting some wonderful bargains.”