Black Monday and The Black Swan

I was test-marketing the VectorVest Stock Advisory at that time and our trustworthy VV DJIA warned us that the Dow was 19.4% overvalued when it closed at an all-time high of 2,709.50 on August 21, 1987. One week later our Buy/Sell Ratio dropped to 0.50. To make matters worse, Head of the Fed, Dr. Alan Greenspan raised interest rates twice between August and October. As the investment climate continued to deteriorate we repeatedly warned our readers to take profits. On October 9, 1987 we advised them to sell low VST-Vector stocks short. See my essay of October 17, 1997.

On October 19, 2007, I wrote an essay called, “Black Monday, 1987.” My opening statement said that the thrust of my 1987 essay was to let our readers know that Black Monday just didn’t happen as a random event. There were several serious problems with the market in 1987 and our indicators were making them apparent. I reviewed the 1987 market situation; then I posed the question, “Is another Black Monday on its way?”

After assessing the 2007 market situation, I said I was bearish six weeks before the crash in ’87, but I was feeling bullish in ’07 up until “today.” I didn’t think another crash was on the way, but “we certainly can have another downturn – even a Bear market.” So here we are 30 years and a day after Black Monday of 1987. Can it happen again? Of course it can, but what is the likelihood that a 22.6% crash will occur soon? It is virtually nil. Here’s why:

First, economies around the world are generally doing well. Earnings are rising here in the U.S, so the Investment Climate is Bullish. Inflation and interest rates are rising, but from very low levels.

Second, the Price of the VectorVest Composite has been toppy lately, but just closed at another all-time high today. The Confirmed Up, C/Up signal from August 31, 2017 is still in play, the Primary Wave is Up and the Color Guard is Mildly Bullish. 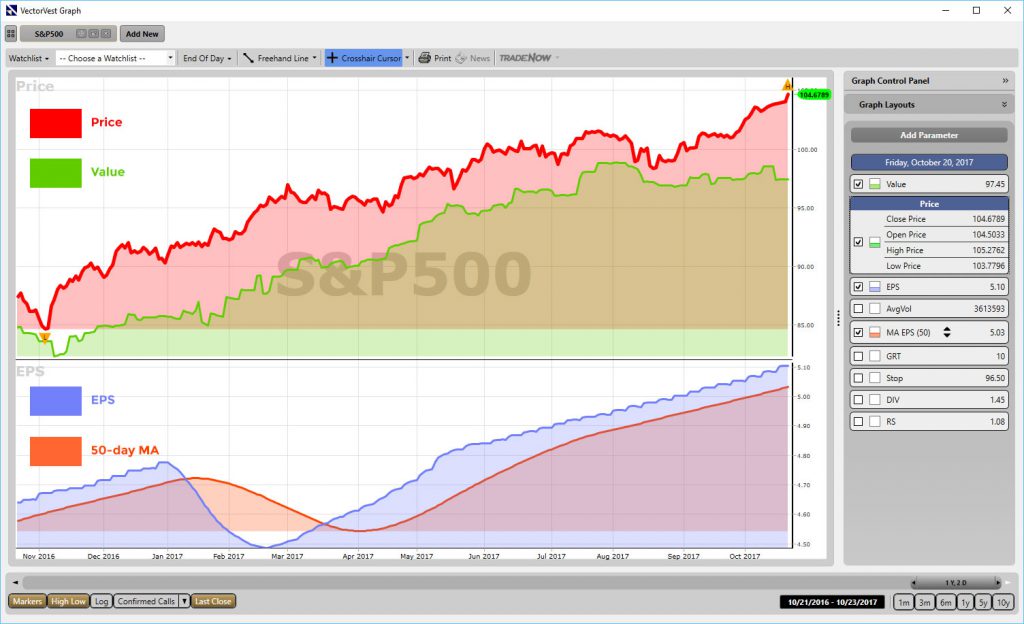 So what’s to worry about? How about a Black Swan? A Black Swan is the occurrence of an extremely unlikely event, which is extremely difficult to predict. In a series of books on risk, probability and randomness, Mr. Nassim Nicholas Taleb, a former trader and risk analyst, popularized the term “Black Swan.”

Do you remember the Flash Crash of May 6, 2010, I would call that event a Black Swan because I don’t know of anyone who predicted it would happen. That’s the kind of thing I worry about. I don’t worry about the market crashing because there are always warning signs of trouble ahead. Ms. Elaine Garzarelli predicted the crash of ’87. She turned bearish on September 9, 1987 and predicted on TV an imminent stock market collapse on October 12, 1987. So it wasn’t a Black Swan event in my book.