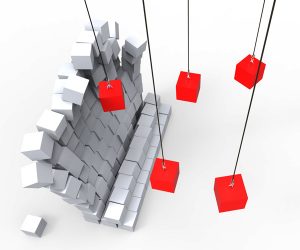 It wasn’t a coincidence or happenstance that one day after I wrote last Friday’s essay about Amazon.com, (AMZN), Investor’s Business Daily, IBD, published a front page article entitled, “The Death of Retail.” Why did that happen?
The common thread between VectorVest and IBD is that we publish information for stock investors, and one of the best ways to make money in the stock market is to invest in new, exciting growth companies and avoid or sell stocks of obsolescent, shrinking companies. That’s what we do.

Amazon.com is an e-retailer and is not about to die soon. In fact, it has played a major role in initiating “the death of retail.” Amazon.com is a young, high growth company that has implemented electronic technologies, e.g., computers, the internet and robotics, to sell an amazing variety of products at lower cost and more conveniently then traditional brick and mortar stores. Why go shopping at a brick and mortar store when Amazon will deliver it to you?

Amazon is not alone in causing the demise of established brick and mortar retailers, but they are the leader. They have succeeded where others have failed. The brick and mortar stores have tried to fight fire with fire with their own electronic retailing facilities, but they have been only marginally successful. The following major retailers have announced store closings for 2017:

The process of a new competitor replacing an established business by providing a better product or service is not new or unique. It has been going on for centuries.

The economist, Mr. Joseph Schumpeter, coined the term “creative destruction,” to describe the incessant process of destroying the old by creating the new. There are hundreds of examples which I could cite, but one that stands out in my mind is how Netflix destroyed Monster Video. Today we have robots replacing humans at an alarming pace, the internet destroying the printed media, video streaming menacing traditional TV, fracking crippling OPEC, Uber and Lyft threatening taxi businesses around the world and even the auto business itself. How does an investor keep up with all of this?

I like to look at the RT Ranking of Industry Groups and Business Sectors. It’s no surprise that Petroleum is back at the bottom with the second to lowest Business Sector RT Ranking of 40. I read a lot of fluff every day about how oil is going to get back to the $60-$70 a barrel range soon, but a 10-yr, End Of Day (EOD) graph of the Petroleum Business Sector showing Price, Value and EPS tells me a different story. Oil is caught in a classic commodities trap of oversupply.

The Retail Business Sector has an RT Ranking of 30 with RV, RS and RT all below 1.00. But the Retail (Major Chains) Industry Group, with an RT Ranking of 1, has the highest RT Ranking of all the Industry Groups. Sears Holdings, SHLD, has the highest RT of all the stocks in the group. I can’t believe it. These guys were talking about possibly filing for bankruptcy this year. YAHOO!Finance shows that SHLD exceeded their Q1 earnings estimate by a wide margin. But look at their 10-yr, EOD graph showing Price, Value and EPS. SHLD hit $187 per share 10 years ago. Now it’s around $13 per share. It’s not for me.

On October 4, 2002, I wrote an essay called, “Tomorrow’s Paper.” Smart investors bet their money on future winners and losers and the results show up in the Industry Group and Business Sector RT Rankings. The decisions of smart investors are not based on guesswork. They understand the game of Creative Destruction.