The Day the Canary Died 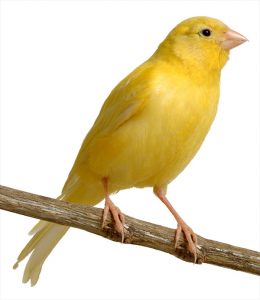 Long before electronic smoke detectors were invented, coal miners carried caged canaries as a safety precaution while working. They knew that the canaries would die well before the level of any poisonous gases in the mine would be harmful to humans. In a similar manner, our Buy/Sell Ratio, BSR, is the VectorVest canary. It will signal the end of the “blast-off” phase of a rally well before you recognize it. 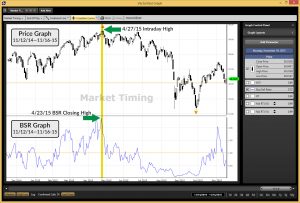 Look at a 1-yr., Market Timing Graph in the VectorVest MTI Layout. Show only VVC Price and BSR. Note that the intraday high Price for 2015 occurred on April 27th. The BSR closing high for the year occurred two trading days earlier, April 23rd. On the very next day, April 24th, the Price of the VVC closed higher than it did on the previous day. Yet the BSR CLOSED LOWER! April 24th was the day the canary died.

A new canary was born on September 30th with the blast-off from the September 29th one-year low. It began to gasp on October 12th and again on October 19th, but survived and was flying high on Tuesday, November 3rd when the BSR closed at its highest level since April 24th. 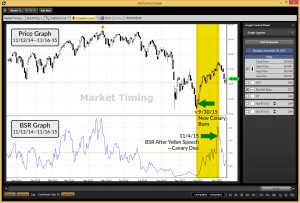 But Ms. Janet Yellen, Head of the Fed, testified before Congress on the very next day, Wednesday, November 4th. Although the market opened higher, before her testimony, it closed lower after her testimony, and the BSR fell 0.22 points. I had warned about Yellen in the Strategy section of the October 23rd Views. With the Price of the VVC having gone down five of the seven trading days since November 4th, the threat of a December interest rate increase has had a more dramatic effect than I expected. For all intents and purposes, November 4th was The Day The Canary Died.

P.S. For more information on the canary, click on the Views tab, click on Views in the Views Manager, type canary in the Text to Search for Box, click on Selected Sections, select Overview and click on Search Views. You should get 11 returns including today. Make sure you read the one from 1/5/2007. It’s especially appropriate under current conditions.