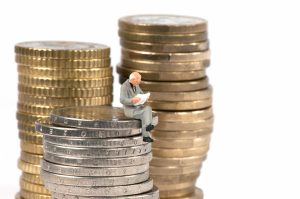 The Wall Street Journal ran a front page story yesterday headlined, “After Long Boom, Weaknesses Appear In Housing Market.” This is very interesting and important stuff, but one of the things I have learned as an investor is that by the time I read something in the paper, it’s too late to take advantage of the information. So how could we see what’s going on before it hits the headlines?

Whether you believe it or not, the stock market has a way of predicting the future. So it pays to see what stock prices are doing. Take the housing stocks, for example. As a group, they have tripled in price while most stock prices have tumbled since March 10, 2000. What was going on?

Take a look at a graph of the Building(Residentl\Comml) Industry Group in the weekly mode. Notice that this Industry Group has been undervalued since the beginning of time. On March 10, 2000, this Industry Group had an average Price of $11.80 per share, and its average Value was $20.25 per share. You may recall that the market as a whole was grossly overvalued with the price of the VVC being $24.46 per share and its Value $18.40 per share. You may also recall that this was precisely the time when smart investors moved out of stocks of money losing companies and began buying stocks of companies that were making money. Just for fun, double click on EPS to the lower right of your graph. This shows that earnings of home builders have risen inexorably in nearly a straight line from 1996 to the current time.

Now double click on the RT Ranking, also to the right of your graph. With your mouse pointer, set the dateline to March 10, 2000. Note that this Industry Group was ranked 129th out of 202 by RT. It was ranked 11th one month later. A move of this magnitude was sending a strong signal that housing stocks were moving up fast. Note that this Industry Group was ranked number 1 by RT on 09/27/00. It stayed in the top 10 for 24 weeks. That’s hot!

So what about now? Convert your graph to the Daily Mode. Double click on price and add a 50-day MA to the graph. Note that the average price of this Industry Group peaked at $47.06 on May 3, 2002, and fell below the 50-day MA at $42.84 on May 30th, signalling the end of a terrific upmove. It’s gone up and down since then, but is currently below the 50-day MA again at $37.91 per share. As of last Friday this Industry Group was ranked 56th, down from 12th two weeks ago.

All of this tells me that the prices of housing stocks are heading down. Studying the price performance of Industry Groups with VectorVest is like reading Tomorrow’s Paper.